To end TB, we need to stop the disease in its tracks by shielding the most vulnerable groups from progressing from latent infection to active disease. 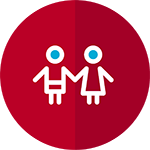 Children Under the Age of Five

Children are at highest risk of dying from TB. By treating all children under the age of five who are exposed to TB, we’re stopping the next generation from dying from TB. The World Health Organization recommends that all patients exposed to TB or multidrug-resistant (MDR)-TB should be treated for latent TB infection. The benefits of treatment of latent TB infection are greater in children than in adults for several reasons:

People being successfully treated for HIV are now dying from TB.

People living with HIV are 20 to 30 times more likely to move from latent to active TB than those without HIV infection.