A critical pillar of the IMPAACT4TB project is the ongoing generation of evidence to ensure that decisions about the use of short-course preventive therapies – including 3HP – are based on the latest available scientific knowledge. Consortium members are carrying out ongoing implementation research to evaluate RPT/DTG drug-drug interactions, models of delivery, and the feasibility, impact and cost-effectiveness of implementing 3HP for PLHIV and child contacts. 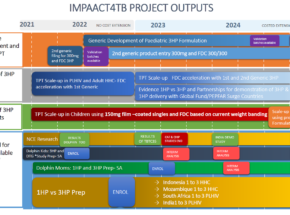 Dolutegravir-based regimens are now recommended by the World Health Organization as alternative first-line antiretroviral regimens (ARVs) for people living with HIV, and several countries with high HIV prevalence have adopted the new regimens.

IMPAACT4TB’s new study paves the way for scale-up of TB prevention among people living with HIV, who are dying from TB in large numbers. This is an important moment for tuberculosis (TB) control, a new study finds that a shorter regimen to prevent TB can be safely co-administered with dolutegravir (DTG)—the first-line drug to treat HIV in many high-burden TB countries. Presented in March at the Conference on Retroviruses and Opportunistic Infections (CROI), the study found that weekly administration of rifapentine and isoniazid (3HP) for three months in adults with HIV taking DTG was well-tolerated, with no need for dose adjustment. The findings put to rest fears of potential drug interactions with DTG and pave the way for scale-up of the 3HP regimen in 12 high-burden TB countries across three continents. Overall, the co-administration of DTG and 3HP was well-tolerated.

Next Steps: Based on results, the IMPAACT4TB project is moving ahead with the introduction of 3HP in 12 high-burden countries: Brazil, Ghana, Ethiopia, Kenya, Tanzania, Malawi, Zimbabwe, Mozambique, South Africa, India, Cambodia and Indonesia. Together, these countries represent 50 percent of the global TB burden. The project will prioritize 3HP for people living with HIV and children under five, and subsequently all those in close contact with TB patients.

The study is being supported by the US Centers for Disease Control and Prevention (CDC) for one site at Desmond Tutu TB Centre at Stellenbosch University and IMPAACT4TB will be supporting an additional site at Perinatal HIV Research Unit (PHRU), in Soweto, South Africa, to accelerate the completion of the trial. The study will evaluate the pharmacokinetics (PK), safety, and tolerability of rifapentine given in a new fixed-dose combination once-weekly, in combination with isoniazid for 12 weeks, in HIV-infected and HIV-uninfected children aged 0-12 years in whom latent TB infection treatment is indicated.

The study utilizes a modified age de-escalation approach given the extensive PK and safety data already available in children older than two years of age. The study will identify new PK and safety data for children under two years of age. The protocol allows for parallel enrolment of children into cohorts 1 and 2, simultaneously, using a predetermined modeled initial dose for each cohort, separately. Similarly, cohorts 3 and 4 will be enrolled in parallel, using modeled doses for each cohort, based on data from cohorts 1 and 2 and historical data from TBTC trials.

PROGRESS: The study started in May 2020. Due to the global COVID-19 pandemic, the study is currently on hold.

Study 3: Compare contact investigation models for increasing 3HP uptake among children under the age of five who are exposed to TB

No details are available yet.

The impact and cost-effectiveness modeling will include a general (“global”) model, as well as specific models to represent the epidemic and economic contexts in at least three key implementing countries (to be determined). Primary outcomes will include the projected reductions in TB incidence and mortality over a ten-year time period, as well as the incremental cost-effectiveness (in terms of cost per DALY averted), associated with scale-up of 3HP for TB prevention among children and PLHIV.

India is strategically important to IMPAACT4TB due to the potentially high volume market for 3HP, the large public health impact of scaling up 3HP, and the generic manufacturers that could potentially produce RPT. A demonstration project will be undertaken in India to generate evidence to support the adoption of 3HP. Part of the transition strategy in our IMPAACT4TB countries is to build evidence by strengthening Monitoring & Evaluation and evaluating innovative, affordable, delivery models and communicating lessons learned in scaling up 3HP. This will encourage other donors to fund and non-project countries to adopt and scale-up 3HP.

The Opt4TPT study is a three-year programmatic assessment of TPT delivery across three countries, namely Ethiopia, South Africa and Zimbabwe, to generate critical knowledge to improve TPT uptake, implementation and outcomes. Specifically, the objectives of the study are to:
– Quantify the TPT continuum of care—from treatment initiation to completion—among PLHIV eligible for TPT and describe reasons for TPT refusal, discontinuation and completion, including patient perceptions, adverse events, drug tolerability, incident TB and death.
– Identify key system and provider characteristics, including models of care present in a clinic contributing to TPT prescribing, including clinic structures, clinician attitudes, and knowledge of and adherence to local TPT prescribing guidelines.
– Conduct a cost-effectiveness analysis.